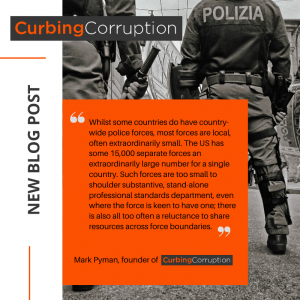 Mark Pyman leads CurbingCorruption, an organisation that brings together experience of successful reform  worldwide.  Raising standards takes different forms in each sector – like in education (here), health (here), military and policing (here). He worked for eighteen years as Chief Financial Officer for international companies in West Africa, China and Europe. He then led the Defence and Security Anti-Corruption Programme of Transparency International for twelve years, working on corruption and integrity reforms to military and police forces around the world (here). He is the lead of author of ‘Arresting corruption in the police: the global experience of police reform efforts’ (here).

The death of George Floyd in the USA throws open the integrity of policing services to public scrutiny, not only in the USA but worldwide. The outrage – at brutality, at racism, at impunity, at toxic cultures – is rightly leading to calls for immediate change, new laws, perhaps some immediate improvements, and a formal follow-up inquiry.

But, be aware, the historical record is that most such policing reforms fail, for reasons that are specific to the unique characteristics and obligations of policing. Some reforms do succeed, but they take 5-10 years of sustained effort, whether incremental or radical. The failure trajectory goes like this. A terrible event happens that exposes deeper problems in the way the police service operates; immediate actions are taken, a Commission of Inquiry is established, it starts out well-intentioned, does an extensive analysis, runs for several years slowly losing momentum, then fails. Such Commissions may fail for any number of easily understood reasons – the difficulty of the task, funds running low, becoming mired in partisan politics, political attention moving elsewhere, police distrust of the reforms – but more commonly they fail for a more fundamental, police-specific reason: arguably the best qualified people competent to investigate the police are usually current or former police investigation officers. If you use them as the main resource for investigating improper behaviour, you risk protective police self-interest. If you don’t use them, then you don’t have the necessary expertise to sustain a proper investigation.

So, what to do in order to succeed?

First, thoughtful structural reform. We know from experience that large organisations, whether in the private sector or the public sector, are resistant to reform. Despite being endlessly studied by organisation experts, management consultants, government delivery specialists, HR experts and so forth, we still don’t really understand why. This mystery applies just as much to improvements of police organisations, where experience with all sorts of police reforms and oversight models, such as self-investigation, civilian oversight and even civilian control have not led to success; examples abound round the world[2].

However, there are plenty of  positive reforms to remind us that this is a challenge that is being overcome. In Australia, where over many decades police operated with brutality and impunity, most notably in the State of Queensland, reform has now resulted in real improvement. In Georgia (the country, not the US State), the first administration of President Shakshivili in 2004 radically reformed the national 30,000 strong police force, including firing 15,000 of them (Here). In the USA, a poor-performing police department in Camden, NJ was  disbanded in 2013[1] a reform that was led by the local police chief.

There are tricky structural issues particular to policing. One is the natural self-isolation of cops from the community, where policing can develop to be more like a ‘family business’, with multiple generations of cops from the same close-knit families. Spain is one such example, where a significant percentage of recruit vacancies are reserved for serving officers’ offspring.

Another, counter-intuitively, relates to critical mass. Whilst some countries do have country-wide police forces, most forces are local, often extraordinarily small. The US has some 15,000 separate forces[3], an extraordinarily large number for a single country. Such forces are too small to shoulder substantive, stand-alone professional standards department, even where the force is keen to have one; there is also all too often a reluctance to share resources across force boundaries. Furthermore, most countries have multiple sorts of police force, city police, highway police, state police, sheriffs, etc – each with their own identity and traditions.

Also specific to policing is internal oversight, which usually does not work effectively: Professional Standards Departments (PSDs) and Internal Affairs Departments (IAD) are the units usually responsible, but they often suffer from under-resourcing, cultural marginalisation and a reputation as an unattractive career choice: Minneapolis seems to be an example of this, with 439 officer misconduct claims but not one disciplined (here) and yet with three oversight bodies (here), but this will be part of a wider pattern not a stand-out exception.

Standard setting for police organisations is also a world-wide issue with many countries lacking any nation-wide or state-wide oversight, nor having professional colleges which are responsible for setting professional standards. In the UK, for example, the first such formal body, the College of Policing, was set up only in 2012. In the absence of such colleges there is little expertise for objectively analysing which standards work and which do not.

Second, more analysis, evidence and availability of data. Police officers are naturally conservative in attitude, and recruits mostly want to serve as operational front-line police officers, not as analysts. In other professions there is a huge and intricate infrastructure of analytical capability – research institutes, university research in specialist departments, often specialist universities, multiple institutes responsible for researching standards, professional associations with annual re-qualification requirements (e.g. doctors, solicitors) – but these are much less evident in policing.

Other professions have a whole sub-industry devoted to analysing data, proposing new sorts of data, and analysing data trends that can help to improve that profession. For example, there should be a mass of research on key determinants of police officer behaviour like the effect of insufficient police training. In policing, that data is of rudimentary quality, often not shared, and tends to be retrospective rather than forward-facing.

Third, people – bi-partisan political prioritisation, community involvement, police commitment. Only rarely will there be a common will among police, the community and the political leadership on the objectives and priorities. Inevitably, at times of downturns, the priority will be to keep the police officers and staff and to cut investment elsewhere, such as in training. The police are under constant pressure to reduce training to the bare minimum. in Germany, for example, it is 2 years before new recruits in the Berietschaftpolizei are allowed to police in towns on their own, whereas in the UK it is approximately 20 weeks. Economic pressure has also incentivised various forms of dysfunctional behaviour, such as when disciplinary controls are negotiated away by police forces in lieu of salary raises.

Specific proposals are the best way to stimulate debate on solutions, proposals for new laws and new institutional practices.  Here are some lines of action that the US could take:

These momentum-building actions could be taken in concrete steps. Achieving Trusted Policing across the whole of the USA would be a larger effort, requiring a decade and the application of the pioneer spirit that dominates America folklore. President Kennedy’s inspirational challenge in 1962 to America to put a man on the moon within the decade seems as apt today in relation to combating racism and rejuvenating policing as it was then to the moon challenge: “We set sail on this new sea because there is new knowledge to be gained, and new rights to be won, and they must be won and used for the progress of all people”.

This is one of two blogs from CurbingCorruption on next steps in policing after the death of George Floyd. The other, here, is from the former head of Police Professional Standards at New Scotland Yard, London. From 2015-2019 Matt Gardner led a team of 430 of police officers and civilians responsible for following up all complaint allegations relating to racism, harassment, bullying and corruption.

Want to comment? Send us an email (See ‘Get in touch, left)