At least once in your lifetime you will need a doctor, lawyer, policeman and preacher..but everyday, three times a day, you need a farmer

Research on corruption reduction experience and strategies in agriculture has now started. If you’d like to help us by contributing your knowledge or experience or a draft blog, do be in touch. The only requirements are that it be constructive and non-political. Email us at editor@curbingcorruption.com

Reducing corruption in African agriculture starts with the Seed. We conduct our own experiment on progress in Kenya

As a Kenyan, a keen kitchen gardener and with a PhD in anti-corruption, I wanted to know: Is there demonstrable progress in curbing corruption in the Kenyan seed industry? You and I have personal stakes in this. As the saying goes: At least once in your life you need a doctor, a lawyer, a policeman and a preacher; but every day, three times a day, you need a farmer.

Small-scale farmers have to deal with the problems caused by corruption in the agriculture sector: when they seek services or finance, in working with cooperatives, in supplies, irrigation, product distribution, market liberalization, land rights and taxation, as analysed by Chris Webster. Farmers in Kenya have agitated for ten years for better regulation of the seed sector, so as to achieve improved seed quality, reliable supply, better affordability and reduced corruption. They succeeded with a formal government policy from 2013, and there is now a government  formal regulatory body, Kenya Plant Health Inspectorate Service (KEPHIS). KEPHIS is mandated to oversee the seed industry in Kenya, including registration of the seed merchants, registration of growers, seed certification, seed packaging, labeling and sealing control. KEPHIS has also developed an interactive platform where all farmers can confirm whether the seeds they buy are genuine or not.

To farmers, seeds mean much more than an input to agricultural production; they are a source of wealth, pride, and identity. This is more so in the informal seed sector that is farmer-based and farmer-managed through farmer seed networks as described by Coomes et al (2015). That is why the seed value chain is also a  political and an emotional business.

My small experiment was designed to see how the platform enables farmers to identify genuine from non-genuine seeds. KEPHIS requires seed vendors to include a hidden code on the seed packet; farmers scratch the back of the packet to reveal the hidden code and send the revealed code to the KEPHIS verification platform or simply send a text to 1393. The images below show KEPHIS stickers before and after scratching to reveal the code. 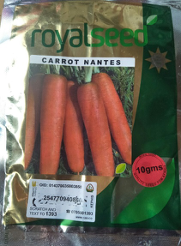 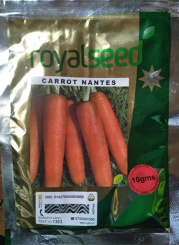 I bought 50 sachets of seeds from 24 species from 13 different companies. The coding systems, the number series, are very different for the different species and companies. All were scratched and the revealed code sent to the verification platform. 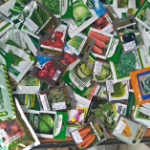 The KEPHIS verification system worked to the extent that there was an immediate response for all the sent codes. 47 out of the 50 submitted codes (94%) were validated as positive or genuine seeds. A sample of the response read; “OK. NANTES 10GMS. SPECIES: CARROT. VARIETY: NANTES. LOT NO:18-05266. CLASS: STD. TESTING DATE: JUNE/2018”. This information matched the text printed on the back side of the sachet.

The response to the code for the sachet, Butternut squash, had a positive response, but the details that came back with the text were different. Though these were butternut seeds from Continental Seed company, the response read; “OK CONTINENTAL SEEDS BATIAN F1 5G SPECIES: SWEET PEPPER VARIETY: BATIAN F1 LOT NO:19-21403 CLASS: STD TESTING DATE: MAR/2019”. The system recognised it as sweet pepper.

The text message verification response to all three of these replies included a KEPHIS telephone number for further enquiry. Unlike a lot of public service telephone lines that hardly go through, I had a quick response when I called, and a technical officer responded to my queries. The officer was ready to trouble shoot quickly all they needed was the code and batch number. For the three seed types that did not validate, germination was confirmed, they had been certified by KEPHIS. The lot numbers were confirmed as existent and valid and had passed the germination test which must be ≥70% and were certified. It was confirmed that the seeds are OK, but the data and sticker processing was faulty.  In all three cases, I also got through by phone to the companies concerned and they too took action in response to my queries.

There is a substantial certification process behind the scratch codes. The seeds are submitted to KEPHIS for germination testing and approval in batches; they are certified upon passing the test before releasing to the market. After approval, the details of the seeds are fed into a central database managed by KEPHIS. At this point, the companies apply to KEPHIS for and are issued with the hidden codes for the approved seed batch, which are released in large quantities, to be used on the market size packs. The company after packaging the seeds and sticking the stickers which bear the codes and the instructions for validation, will have a responsibility of activating the codes in the central database. Once activated, the codes cycle is complete and will give a positive feedback in validation system. KEPHIS keeps the database for all seed companies and the seeds for traceability. This has controlled corruption in the seed sector because any sachets without the KEPHIS coded stickers will not be stocked by dealers. Initially when this system started there was cases of fake stickers from corrupt seed sellers but the validation system has helped wipe this away.

According to KEPHIS, farmers are increasingly using the service, therefore small-scale farmers can tell fake seeds from genuine seeds. However, the work by KEPHIS has been criticized as overly bureaucratic. The regulator is focused on protecting seed consumers from low quality seed through compulsory certification. Other Sector players feel that a different strategy focusing on stimulating the industry towards a competitive environment hinged on self-regulation could lead to higher seed quality, more reliable supply, greater competition, more innovation and ultimately lower costs. There are also problems for bigger packaging of seeds: a farmer buying a few grams of spinach seeds can easily verify the genuineness of the seeds through the interactive platform but one buying 10kg or more of maize seeds or beans seeds may not be able to. This leaves a big gap because majority of the farmers in Kenya plant large quantities of maize, beans and other legume seeds every year.  Despite these challenges, KEPHIS reports that they receive many queries especially in the planting season with most issues being similar to those found in this experiment. One achievement so far is that all the queried stickers can be traced back to KEPHIS, therefore the fake seed stickers and fake seeds are gradually being eliminated from the market.

This small experiment suggests that the system set in Kenya to fight corruption at seed level is broadly working, though there are loose nuts that need tightening to allow the system to work more effectively.  It shows how curbing corruption in the seed sub-sector entails breaking down the steps in the supply chain and verifying them either by the regulator or, as here, by the user of the seeds.  As corruption in the seed sub sector is gradually curbed, so effort will be focused on the next part of the agriculture food chain.

You can download this blog as a pdf here.  Or the full article here: