Corruption issues and remedies are usually best addressed at sector level, not at whole-of-government level 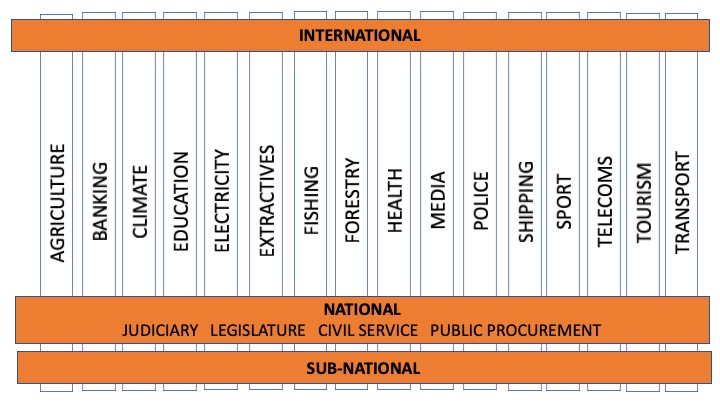 In working sector by sector, CurbingCorruption responds to a major shift in the structure of modern economic society. Today, almost every area of national life includes public elements, private elements and regulatory elements.

Some areas may still be more public than private, such as taxation and policing, whilst others may still be more private than public, such as fisheries or tourism, but the increasing inseparability of public and private via all sorts of mechanisms, such as  outsourcing, the dictates of national strategy and the acceptance of executives having multiple roles, has become a core characteristic of most areas of national life today.

Front-line reformers understand their sector (health, education, telecoms, policing, etc). They understand the economic incentives that drive their sector, the language of their sector, the social norms that govern peoples’ behaviour, the political specificities of the sector. There is also usually ownership and pride among those working in any given sector, powerful motivators if ways can be found to harness them. Even in the toughest corruption environments, where progress may only be possible in tiny steps, there are many sector improvement measures that can help, and which can form the basis of a much larger improvement when circumstances change.

Why are Sectors are a good locus for reform?

Working within the sector brings significant benefit for corruption reformers. When they operate inside a given sector (such as in health, construction or telecoms), the reformers understand the economic incentives that drive the sector, the social norms that govern peoples’ behaviour, the political specificities in that sector. Greater focus comes from these deeper insights. Thus, for a reformer working in, say, the electricity and power sector, they would be familiar with corruption issues associated with the power regulatory agencies, the state-owned power entities, the immense leverage of power pricing that are accessible to only a few, the leverage of favorable financial investment terms, the political dimensions of public access to cheap, safe power, and so forth. By contrast, a reformer working in health will be attuned to the political power of doctors and of medical device companies, to the immense scale of private payments for health services in poorer countries and its abuse, to the benefits and threats of generic drugs, and so on. What we see, as exemplified by these two sectors, is that many of the openings for corruption and therefore the nature of the possible reforms are quite distinct.

What is a sector?

There is no universally agreed upon definition of a sector. In economics, besides the generic terms public sector and private sector, sector tends to mean industry sectors, usually as defined in various national and multilaterial classifications such as NACE (nomenclature statistique des activités économiques dans la Communauté européenne) and relating almost exclusively to the private sector. In the development world, sector tends to denote the public sector, with particular reference to those areas of the government expenditure most relevant to development agencies, such as agriculture, construction, education, health, power and water.

We use the following, updated, definition of sector (adapted from Heywood and Pyman 2018, Pyman 2020):

Sectors are the individual structures and functions through which national life operates. Structures include the legislature, the judiciary and the civil service. Functions include public functions, such as health, education, policing and public financial management; economic functions, such as agriculture, telecommunications, mining, construction and shipping; and the multiple public-private functions that span both public and private, such as sport, infrastructure projects, tourism and land management. A sector comprises some or all of the following: one or more professions, a government ministry, multiple government organisations and agencies, multiple commercial organisations and the relevant industry associations; one or more multilateral organisations concerned with international application; and a functional or market regulatory authority.

There is no natural number of sectors, and for each sector, such as water, there are always sub-sectors, such as water table management, water services, and further possible sub-division. A parallel with the four-level industry NACE classification system  is helpful. The NACE list identifies 21 Economic Areas, which in turn are subdivided into 88 divisions, then into 272 groups and then finally into 615 classes (European Commission 2020).

CurbingCorruption has a working list of sixty sectors, categorised into 13 different areas. These are: 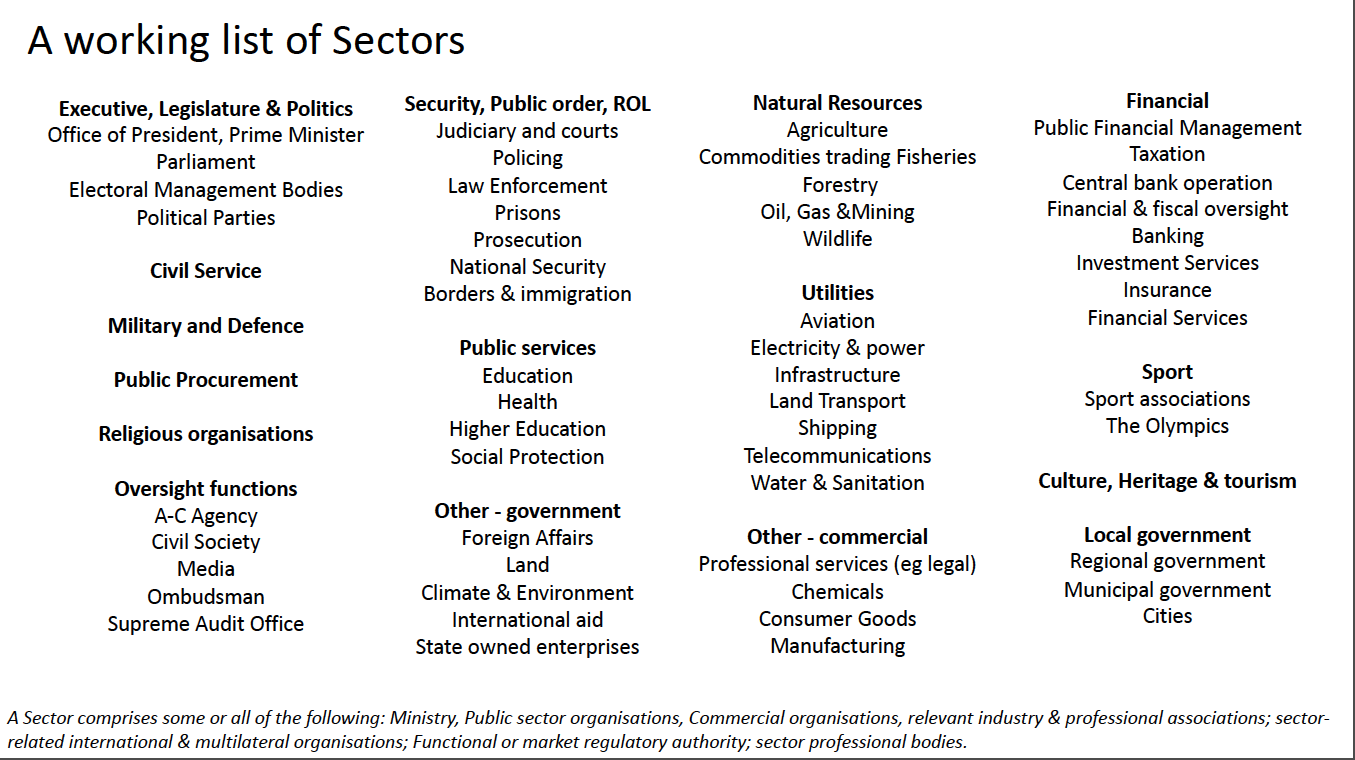