This step is not usually found in handbooks on strategy making or corruption reform. But it forms a core part of SFRA because progress is made by reducing the corruption barriers to the achievement of other mainstream objectives, rather than tackling corruption as a generic problem

For any leader or manager, the primary objective relates to delivering the policies, services or products for which they are responsible. Even when there are significant corrruption issues, the primary delivery objectives are usually unchanged.

The objective of the corrruption-related efforts is to improve delivery by avoiding, preventing, limiting or eliminating the negative impacts of corruption. Many of these impacts directly damage the organisation. Examples include siphoning off funds, over-pricing, illicit sale of products, operation of patronage networks inside the organisation, reducing effectiveness through absenteesim or restrictive practices or corrupt recruitment. The impacts may also be indirect, notably the damage caused by perceived tolerance of corruption: to reputation, to internal morale, to international standing.

Reducing corruption is usually not the main objective

Many would assume this to be the core objective of an anti-corruption strategy. But, reducing corruption is more usually a means towards more widely desired policy objectives, rather than the desired end result in itself. At the ambitious end of the spectrum, the objective might be to raise the trust of the public in the system, or to improve access for all to services, or to ensure that all professionals and officials operate to high ethical standards, or to reduce costs. This is a really important point.

A recent analysis of national-level anti-corruption strategies from 41 countries ranked from 21stto 130thin TI’s Corruption Perception Index reinforces this point. The authors identified the following objectives stated in their strategies: To improve service delivery; to improve national reputation, to improve the nation’s ranking in the CPI, to strengthen democracy/transparency/integrity, to improve economic prosperity, to improve economic competitiveness, to strengthen national security, to be aligned with international anti-corruption standards, and to gain accession to the EU. Taken from Pyman et al (2017).

What you actually do

The practical answer is that the team convenes people in intensive discussion of the situation, first on the problems and then on the objectives. The people involved may be co-workers, officials, stakeholders, a wider leadership group, or citizens, where appropriate:

Discuss how many objectives there are? Are we being realistic about the objections we will face, about the time scale, about the level of ambition? What it is that we really want to achieve? Would we be better served by having some form of intermediate objective? Would we be better served by having a proximate objective, that might be more easily articulated? Which of these objectives are we best placed to achieve because of any advantages and/or leverage that we have, be that political, technical, motivational or social? If the situation is complex, is there a hierarchy of objectives (small ones being addressed by small projects, etc).

Whilst the Minister of Education was not keen on reform, several of his senior leadership were keen to see corruption reforms underway and supported a deeper analysis. That analysis, carried out by MEC, consisted of 542 interviews in the ministry and in schools across the country. It led to a significant reformulation of the corruption challenge. Instead of corrupt construction of schools as the expected key challenge, what emerged from the analysis and the discussions as the issue seen as most damaging for Afghanistan’s future was the nepotistic appointment of teachers across the country. It was also an issue that was possible to address (MEC 2019, Pyman 2018). 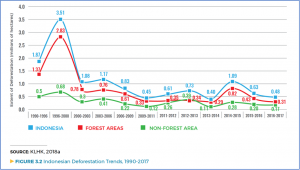 A current example of reformulation of the mainstream objective, is the effort by Indonesia, supported by Norway, to reduce greenhouse gases from deforestation. It is clear that many of the barriers to achieving this outcome are corruption-related ones, but it would seem to be more prospective to retain the objective of a quantified reduction in greenhouse gases, rather than to set an objective of reduced corruption. Indonesia has in the time of the partnership introduced three types of moratoria – against logging, against peat exploitation and against the expansion of palm oil concessions – whilst at the same time having various initiatives that strengthen police action against illegal loggers (Norad 2020). The case study can be found here (as a stand alone document) or here on the NORAD website, bundled with the other Case Studies. 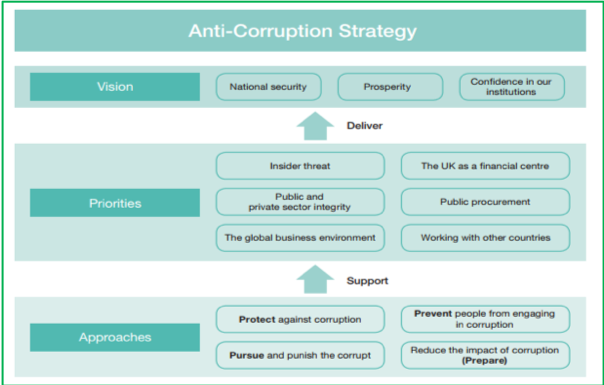 good example of high level vision and strategy objectives comes from the UK government’s national anti-corruption strategy 2017-2022. They see the Anti-Corruption strategy as critical to help ensure national security against insiders, to help build the prosperity of the UK, through building up the UK’s reputation as a partner for overseas trade, and to strengthen the confidence of British citizens in UK institutions. As you see in this UK example, they then have six priorities, ranging from the key corruption threat (from insiders) to the importance of cooperation with other countries.

However, your objectives don’t have to be ‘grand’ ones like these. You could alternatively have smaller, less tangible objectives. One such would be to ‘Build confidence across the organisation that it is possible to make progress against corruption’. A similar one would be to build a culture where people feel free and empowered to try out many different ways of tackling corruption: you could call this ‘improvisation as strategy’.