July 2020: Reducing corruption in African agriculture starts with the Seed. We conduct our own experiment on progress in Kenya

As a Kenyan, a keen kitchen gardener and with a PhD in anti-corruption, I wanted to know: Is there demonstrable progress in curbing corruption in the Kenyan seed industry? You and I have personal stakes in this. As the saying goes: At least once in your life you need a doctor, a lawyer, a policeman and a preacher; but every day, three times a day, you need a farmer.

Policing reform poses a dilemma that is unique to the subject. The police have to ensure that law and order are enforced.  To do so, they must have the trust and consent of citizens. In return, the police’s own behaviour must be above reproach. But what happens when they fail: when they themselves are guilty of brutality, corruption, harassment and racism?  Who brings them to account? This is a challenge that currently defeats most societies, as shown recently in the US and UK.

This new blog site from CurbingCorruption contributes practical ideas and experience of good police accountability: the institutional mechanisms and the laws that govern behaviour standards, control investigation of wrong doing, and enforce the values that all officers must follow. This includes both internal control, through police Professional Standards Departments (PSDs) or Internal Affairs Departments (IADs), and external control, where the town, city, state or some authorised body exerts independent or semi-independent oversight of police. Neither form of control  works well enough today.

This blog is a pro-bono effort from CurbingCorruption, working together with Matt Gardner, who used to lead the PSD command in London’s Metropolitan Police, with 430 staff. We welcome blogs from citizens, law enforcement officers, politicians, researchers, anyone.  To comment or to submit a draft blog, use the ‘Email us’ box to the left.

March 2020: Is Telecoms the most corrupt sector?

Of the ten companies that have paid the largest FCPA penalties ever for corruption, four of them are telecom companies: Ericsson and Telia (both from Sweden), Mobile TeleSystems (Russia), and Vimpelcom (Netherlands). The industry associations seem not to be active on the topic. The United Nations International Telecommunications Union (ITU)  includes 193 Member States as well as  900 companies, universities and regional organisations. Their purpose is ” to help shape the future ICT policy and regulatory environment, global standards, and best practices”. But no mention of corruption or corruption risk.

Read CurbingCorruption’s full blog  here. It is by Birgitta Nygren, the telecom sector lead for CurbingCorruption. She is the former Ambassador for the Swedish Ministry for Foreign Affairs, co-ordinator for Swedish participation in different international anti-corruption initiatives. She’s also a former Member of the Board of Transparency International Sweden.

The health sector’s ability to prevent, manage and sanction corruption is considerably underdeveloped and it is estimated that as much as 6% of global health spend, or $440Bil USD, is lost every year to corruption and fraud (OECD, 2017). The cracks and fissures in health systems stand to delay or completely undermine the achievement of health-related Sustainable Development Goal (SDG) targets including, Universal Health Coverage (UHC).

The Global Health Action special issue is a joint undertaking with the World Health Organization (WHO) which in recent years has begun to promote a coordinated public health approach to ACTA by working with global partners to create new internal control and assurance models; increase monitoring and evaluation; develop capacity for multiple stakeholders to address corruption in health; and strengthen normative guidance for member states to integrate ACTA into WHO’s work on health systems strengthening.

The contents of the special issue complement the Global Network on ACTA in the Health Sector, which held its inaugural meeting on 26–28 February 2019. This first consultation was jointly convened by WHO, Global Fund and UNDP (with co-funding from UK Aid), with participation of more than 130 global stakeholders from public health, anticorruption, financial management, academia and so on.

November 2019:  Clients should require their law firms to have robust compliance programs

Argentinian lawyer Sofia Tirini argues in this blog that clients of law firms should require their law firms to have robust compliance programmes. And in a longer article, published on the ‘Legal Service Sector’ page of CurbingCorruption, here, she proposes seven further measures to strengthen the profession.

October 2019: Fighting police corruption  in the London Metropolitan Police and beyond

A blog from Matthew Gardner, who previously served as the Head of Anti-Corruption at New Scotland Yard, Metropolitan Police, and who is currently covers police-related issues for CurbingCorruption.Com . Four reform measures are discussed:

We are starting our analysis of corruption reform in the electricity and power sector. This is a major sector, with significant corruption issues in both developed and developing countries.

‘Usain Bolt’ meters: Reform successes in the electricity sector can be quick, but only the failures get reported

A very interesting, original analysis of the dramatic progress in electricity supply in Ghana and Kenya. The author, Dr Festus Boamah, finds that there were numerous improvements in the way electricity programmes were rolled out, leading both to better access and to reduced abuse through corruption. Successful reforms included many ‘problem-solving’ measures, such as the frequent monitoring of electricity infrastructure, introduction of pre-paid metering systems, improved revenue collection/tariff payment mechanisms, establishment of legal frameworks to punish criminals involved in power thefts, effective oversight roles of civil society organisations and vibrant media engagement in the procurement of electricity infrastructure.

If you Google “corruption,” you get 344 million hits. A large number, yes, but dwarfed by “change management” with 4.1 billion hits.

This huge volume of advice is a reminder that changing corporate behavior is hard to do. Yet within the anti-corruption, compliance and legal communities, guidance on how to change the behavior of organizations continues to be narrated simplistically, through such tropes as “tone from the top”. Cultures are more effectively changed by business leaders and regulators who believe that better business comes from actually reducing the corruption in their sector, not just by limiting their exposure to it.

Every now and again we see great examples of this. This blog describes three examples

In 2008, 14 state/region governments with legislative and administrative responsibilities were created.

Three mechanisms have been established for public participation in the subnational governance system: Members of Parliament have been set up to be locally elected; Township Management Committees (TMCs) and Township Development Affairs Committees (TDACs) were established with some community representation. In 2012, Ward/Village Tract Administrators were made to be directly elected by community members through a system of voting for household leaders.

Survey results – below – show significant variations in corruption between Myanmar urban regions. So far there is no obvious explanation for the differences. 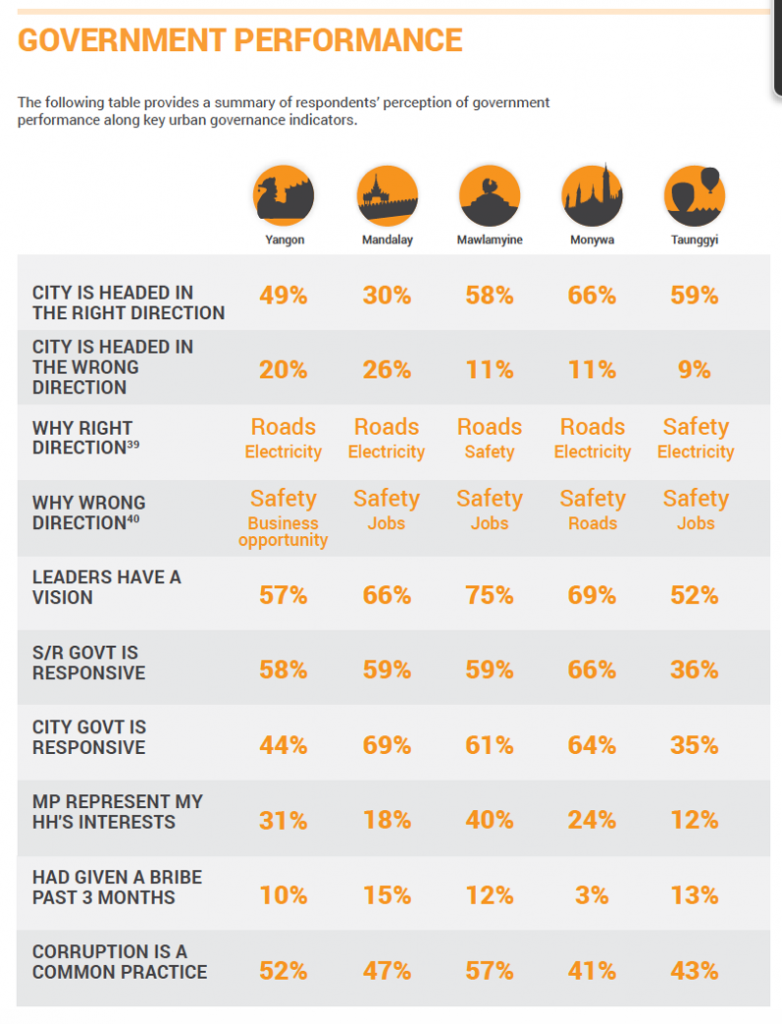 Research and field work exploring local government corruption reform in Myanmar, by Heesu Chung. At the time of the research, the author was a graduate student at the Fletcher School of Law and Diplomacy, Tufts University, USA. She is now employed by the Asia Foundation in their San Francisco office.

My experience in Afghanistan suggests that anti-corruption strategies need to be tailored to the specific enablers and drivers of each particular sector.

Presentation by Mark Pyman to the World Bank and several of their ‘Communities of Practice’ on tackling corruption using sector-specific approaches.

A slide talk by Mark Pyman, detailing the purpose and benefits of tackling corruption sector by sector. This talk was given in April 2019 to Ghanaian civil society in Accra, to Communities of Practice within the World Bank, and to an open audience at the Open Gov Hub in Washington DC.