What do we mean by transparency reforms?

Publication of defence policy and forward plans is an important element of an accountable defence sector. All defence organisations would be expected to develop, debate and publish a white paper on the defence policy for the coming few years. If this is not the norm then it would be the natural first step in raising accountability and transparency.

One of the best examples was the efforts that the South African Defence Forces (SADF) went to after the end of apartheid, to move the defence sector from being an upholder of a hated regime to an accepted part of the new South Africa. What they did was mostly about inclusiveness: see here and here for what they did.

Unfortunately, this excellent public process in developing the new policy was subsequently spoilt by a huge scandal of corruption in the later procurement of large military hardware (see here and here)

Plenty of guidance is available on developing accountable defence policy; see here and here, for example.

Corruption reform efforts in defence tend to focus first on procurement, then on other areas of defence spending. Yet the defence sector – military and/or the ministry and/or defence associated agencies – often receives substantial revenue. If this is not carefully and publicly controlled, these sources can easily become pathways for corruption.

The starting point for control is simple – to ensure that you have full knowledge of all such revenue. Often it is scattered across many different legal entities; some of these may also not be transparent or even truthful about the full extent of the revenue.

Once you are sure that you have full internal visibility, the normal controls are 1) to ensure that all sources of revenue are captured within the defence budget; 2) to ensure that adequate accounting organisations are responsible for monitoring and accounting for the revenue; 3) to regularly review the controls to ensure they are adequate; and 4) to conduct periodic audits on defence revenue. 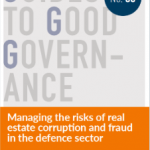 Public transparency is a major corruption reducing tool. Not just the sources of income in the defence budgets, but also full statements of each source. In the case of property and assets a full breakdown of the assets sold or leased should be made public regularly.

Bulgaria is one country that radically improved the transparency of property and asset sales by the MOD. See here.

Another source of guidance is available from CIDS and can be found here.

As with the defence budgeting process, there is plenty of knowledge on what good practice looks like. Questions to ask include:

Defence budgets should be as fully detailed and specified as for any other major Ministry. In some countries this is not true, with much less budget disaggregation, either in terms of the headings or the individual line items. 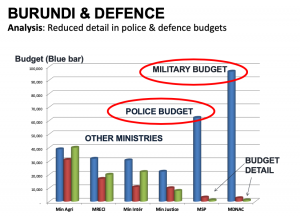 Approximately one third of countries assessed as part of the TI defence countries database publish a defence budget that is detailed and transparent. These countries often have mechanisms in place allowing them to maintain a justifiable level of secrecy while ensuring that the defence budget is disclosed in a manner that means accountability can be enforced.

Good defence procurement requires that contractors have some advance notice of your requirements. It is very helpful to them if your forward acquisition plans are public. The issue is less one of corruption than one of effective preparation by contractors for major bids. This has become good practice in most defence organisations around the world.

If it is not current practice, then this is a good measure to implement. MODs in countries such as Croatia (see here) and Serbia (see here) have opened up to such practices being normal, rather than secret.

Good public communications is a simple way of developing public faith in their defence sector. This covers both openness in publishing defence material and a preparedness by the MOD to enter into real discussion.