Text here..what do we mean by strategy?

A narrow focus is self-explanatory: picking just one or just a few changes, on the grounds that such targeted efforts are more likely to succeed than a broader change effort.

There are several very different contexts where this may be the best strategy:

A broad corruption reform strategy is appropriate when the defence leadership wants to show that integrity and corruption minimisation are a central pillar of the national defence organisations.

This can be true in high corruption countries, where the government has been elected on an anti-corruption platform and each ministry is required to set up and implement its own reform strategy. One such example is Bulgaria, see below.

It is also appropriate where there is high insecurity in the country, that may be at least partly due to a mistrusted and/or corrupt military/MOD; and major reform is called for. A good example of major reform in such circumstances is Colombia, where the military have been part of both the problem and solution in dealing with corruption throughout the major, long-running insurgency of the FARC. The example is discussed further below.

It can also be appropriate in countries where corruption may be limited in defence but the problem has never been properly addressed before, at least not in an sustainable way. Even though the problems may not be fundamental, the defence leadership wants to set up a proper management system that will ensure that corruption risks are considered and acted upon in a regular way in the future. This has sometimes been referred to as ‘ensuring that attention to corruption because a natural part of the DNA of the organisation’. There are examples of the UK and New Zealand, see hereand here. 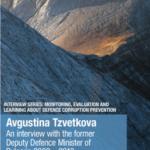 An example of a broad reform strategy in 2009, with the goal to make progress on a broad front. About half-way through, the strategy was changed after the government lost power in 2013. They prepared their plan in advance of election, and made many changes on arriving in power at the MOD:

There is a report that describes the reform strategy and effort, here.

The Bulgarian government of 2009-2013, led by the GERB party, was strongly focused on anti-corruption. Bulgaria had just had some of its EU funding cut off due to lack of progress on tackling corruption. The focus was especially strong in the Defence Ministry, whose senior leadership had already developed an anti-corruption strategy in 2008, ready to implement in 2009 were they to be elected.  Theirs was a broad initiative, attacking corruption on almost all fronts, using the new NATO-TI integrity-building tools, encouraging external media and NGO engagement, being highly transparent.  TI-DSP actively supported the anti-corruption initiative, mentoring the leadership, assisting with training and facilitating leadership events.

The successes and failures of the initiative are described in some detail in a detailed interview with the Deputy Defence Minister[1].

The GERB government resigned in 2013, and the successor administration reversed a number of the reforms. My own conclusion is that they tried to do too much with a Ministry and military that still had deep ‘particularistic’ roots, with insufficient time. They could have been faster in the first year – Minister Tzvetkova comments that perhaps she tried too hard to convince the 100 Division Chiefs of the merits of reform and was thus too slow to dismiss those resistant to change – but it seems to me that they were pretty quick nonetheless, having already pre-prepared their plans. Minister Tzvetkova’s own assessment is that she was halfway through their reform programme when the GERB government fell. There is a parallel to TI’s defence work in Colombia in 2006/7/8 (see below), where the Defence Minister commented that one electoral cycle was insufficient time for a full, range of anti-corruption reforms in the Ministry. She thought that real cultural change would take 4-6 years, meaning that two cycles were required, on the basis that the first and last years in each electoral cycle would be taken up with campaigning or getting (re)established. 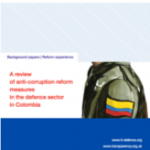 The reforms were substantial and were among the government-wide improvements that led to the greatest increases in public confidence – see the table below showing progress as measured by the World Bank in 2010[2].

Once defence officials and officers recognise that there is a problem to be solved, they want to analyse it, develop reform plans and implement those plans. They take the same approach of professionals in almost any sector.

Where defence is different is in the immense emphasis on training in the military sphere. Training is at the heart of learning and adaptation: only this way can officers, officials and soldiers can then better recognise the problem in future and are equipped to deal with it.

Helpful advice: DCAF/ISSAT is one of the leading institutions in the design and delivery of training programmes on Justice and Security Sector Reform. On average, ISSAT facilitates close to twenty training courses each year. ISSAT courses use the co-learning methodology that encourages a participative, problem-solving approach through use of case-studies, exercises, examples and the collective sharing of experience. Read more here.

The Centre for Integrity in the Defence Sector (CIDS) is an entity within the Norwegian Ministry of Defence that assists nations in strengthening integrity in defence. They have worked with many nations and some of the resulting plans and strategies are publicly available on their website. It is well worth contacting them (email here).

Among other resources, CIDS has a good handbook that guides a military and/or defence ministry through the necessary steps of developing an integrity reform strategy – from the planning stages to the actual drafting of the plan through to practical implementation.

You can read their full handbook here. Or read more >

The CIDs handbook takes you through the following steps:

Drafting the plan– the document, main body of the plan, examples 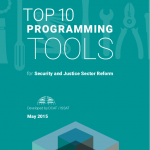 From a different perspective, DCAF/ISSAT have done considerable work with countries on developing action plans to improve security sector integrity, as per the report, see opposite and here

REFORM PLANS BASED ON THE TI ANALYSES △

The quantitative, evidence-based approach to underpin the chosen strategy is working well in defence. 66 defence ministries/militaries followed up with TI on the 2015 analysis, several with detailed strategies.

Having quantitative metrics with ‘model answers’ allow for improvements – or the lack of them – to be demonstrable. This is not only beneficial within the MOD and military, but can also be used externally, eg with citizens, the media.

Quantitative metrics allow for some seriously useful benchmarking and critical discussion with other nations on what is good/bad about groups of countries.  This excites professionals like almost nothing else and is also motivating.

The summary rankings for all the 113 countries were shown and discussed in the ‘Corruption types’ part of the defence sector review, here. You can also see the overall ranking table here. +/-

NATO encourages its nations – both allies and partners – to strengthen integrity in their defence institutions. Called ‘Building Integrity’, or ‘BI’ for short, this initiative has been running since 2007 and is now well established across the NATO system.

The BI approach is to request a NATO team to carry out an assessment of the vulnerabilities to corruption in the nation’s defence institutions, then to discuss and agree an action plan to remedy the deficiencies found.

NATO BI also runs a substantial number of training programmes and runs workshops for practitioners working in NATO defence institutions on integrity an counter-corruption. You can read more about the BI initiative on the section on transnational initiatives, here.

It operates through nations completing a BI Self-Assessment Questionnaire (SAQ) and Peer Review Process, then developing a Tailored programme to build capacity.

In general, military forces do not have a high public profile. Most corruption reform strategies are therefore largely internally focused: relating to the internal institutional strengthening of the ministry of defence and the military.

However, an externally focused reform strategy may be more appropriate where there is high public mistrust of the military. Externally visible reforms – such as stopping the practice of soldiers taking bribes at checkpoints – are not significant financially but can have a bigger effect on public opinion and public support for the military.

Colombia was one example (see above and here) where the military needed to rebuild public trust after all the abuses and corruption related to the war against the FARCC. Burundi is another case. In such situations internal reforms like improving integrity in high value procurement may be very significant financially – and necessary – but are unlikely to lead to any positive reflection among the public.

Most defence anti-corruption strategies do not prioritise actions against corrupt officials. This is because it is difficult to prosecute senior officers or senior staff in a legal environment that may be fragile and politicised, and/or the prosecuting environment is easily used as a political tool.  Punitive action may also require handling suspected cases of corruption or other fraud over to the police or other external agency for further investigation and potential prosecution, with unpredictable results.

However, the cases of corruption are often so visible and/or egregious that an anti-corruption plan does not have credibility unless active measures are being taken against the offending individual, and punitive action should be a component of the action plan. It usually takes the form of firing officials and officers, as in Afghanistan, Bulgaria, Ukraine and the USA.  A quieter form of internal discipline is through the introduction of a strong asset declaration requirement. Poland took this route for officers at and above the rank of Colonel as an “intermediate” way of showing reduced tolerance for this behaviour without going the extra step to prosecution. It is seen as having been effective.

Integrity building measures are less contentious politically, and work naturally with the grain of the values of public and military service personnel. They thus tend to be popular with military personnel, and this can serve as one way of building support for the action plan. See the example of Saudi Arabia. A focus on training can also be the right approach where there is little or no top-level buy-in on anti-corruption, but where there is none the less enthusiasm for reform from the middle level and downwards. See the example of Ukraine prior to 2014.