Integrity is a nice word, all about good behaviour, holding your head up proudly, doing a good job. But the starting point for change may be the opposite: being brave enough to commission a report that might say the opposite about your military or your Defence Ministry.

Here are two examples, both from the USA.

Lying to ourselves: dishonesty in the army profession 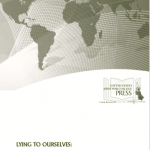 This report from the US Army War College in 2015 was a penetrating and uncomfortable analysis of how multiple well-intentioned obligations placed on army officers have led to a culture of deceit. As the Director of the US Strategic Studies Institute says in the Foreword: One of the hallmarks of a true profession is its ability to assess and regulate itself, especially with respect to adherence to its foundational ethos. Such self-examination is difficult and often causes discomfort within the profession. Nonetheless, it is absolutely necessary to enable members of the profession to render the service for which the profession exists. U.S. military professionals have never shied away from this responsibility, and they do not today, as evidenced by this riveting monograph. Discussing dishonesty in the Army profession is a topic that will undoubtedly make many readers uneasy. It is, however, a concern that must be addressed to better the Army profession. Through extensive discussions with officers and thorough and sound analysis, Drs. Leonard Wong and Stephen Gerras make a compelling argument for the Army to introspectively examine how it might be inadvertently encouraging the very behaviour it deems unacceptable. The unvarnished treatment of this sensitive topic presented by the authors hopefully will be the start of a dialogue examining this crucial issue.

Unsurprisingly the report was controversial; one of the authors told me just how much abuse and anger he had had to face as a result of doing that work. Yet they were right to do it and, as they say in the conclusions “the first step toward changing this culture of dishonesty is acknowledging organizational and individual fallibilities. Until a candid exchange begins within the Army that includes recognition of the rampant duplicity, the current culture will not improve.”

US Department of Defense survey of staff opinion 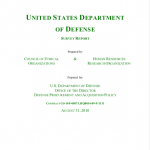 In similar vein, a large survey was conducted within the US Department of Defense (DoD) on ethics, dishonesty and corruption risks. The results also made uncomfortable reading. Whilst the DOD was to be applauded for commissioning that study, they sadly have been shy about letting it be seen too publicly, unlike the US Army War College. The report concluded that the results for DOD officials were ‘about average’ with other government entities but had clear comments on weaknesses, the first two of which were:

Almost all militaries and defence forces have in place a legal framework to regulate business conduct. However, this is usually articulated deep within national regulations as a set of legal obligations. They are rarely used to simplify regulations for defence personnel and to aid ethical decision-making.

A majority of regimes are ‘compliance-based’ – i.e. rather legalistic in nature. This means that the presentation and readability of guides and standards documents is commonly poor, which is a significant obstacle to ensuring that regimes are fully understood and that they reach key audiences.

This can therefore be an ‘easy win’ in a programme to strengthen good behaviour in military forces, and defence ministries providing the changes are done within a wider framework of training and education on what constitutes acceptable conduct.

An extensive analysis of what constitutes good practice was done by the TI defence programme in 2011, based on a detailed review of military codes of conduct and related standards in twelve nations: This report, available in english hereand in Arabic here, presents the conclusions from an analysis of the written codes of conduct and related documents from 12 participating nations: Argentina, Australia, Croatia, Denmark, Germany, Kenya, Lithuania, Norway, Saudi Arabia and Spain. It builds on an earlier study of the same subject among 32 nations. nations were Albania, Bulgaria, Canada, Chile, Colombia, Finland, Georgia, Ireland, Latvia, New Zealand, Nigeria, Pakistan, Poland, Portugal, Romania, Russia, Serbia, South Africa, Tanzania, Uganda, UK and USA. TI present a template of good practice based on this analysis.

Presentation and readability of documents +/-
8. Material should be condensed into a single, accessible reference document.

Conflicts of Interest +/-
21. Officials and officers should be prohibited from

performing official work on any matter where a person, family or close relationship is liable to raise doubts about their impartiality.

The template of good conduct standards shown above is one way forward as [part of a drive to strengthen integrity in military forces and defence ministries. Another is to develop a more comprehensive integrity framework across the whole sector. The OECD has been developing such an approach for civilian use, see hereand here, and it may well cross over to defence sector use as well (though we know of no current applications – email us if you do)

Quite separate from working on the integrity and conduct standards of the military and defence officials, the same approach needs to be required of defence contractors.

Defence contractors are no longer just the people who provides goods and equipment. Increasingly they fulfil a wide range of essential functions within a modern military, such as logistics, guarding and intelligence. The personnel numbers in the US military, for example, comprises about 50% contractors.

There is a huge literature on ethics and compliance programmes for companies, and you can easily find experts on this subject. The issue for government is more about legally requiring such programmes in all defence contractors and 2) ensuring the programmes live up to standard by audit, performance management and sanctions. You can read more on how to build supplier standards in the ‘Private Sector’ review in this website, here.(more to come).

Making the commitment to integrity and corruption prevention visible at the level of the rank and file soldiers is almost a holy grail. Difficult both because of the huge numbers involved and the natural human cynicism for any sort of management initiative.

We know of two examples where something of this kind has been attempted recently.

One is in Colombia, where the military have been making major efforts to ensure that their soldiers are onboard and engaged with the integrity efforts. Part of the rationale is not just ‘anti-corruption’ but to build confidence in the post FARC era. The initiative extends down to every soldier having ‘integrity’ embroidered on the sleeve of the uniform. For more on this initiative, see here.

Another was in Pakistan. Where the new leader of the regional military changed public opinion by using the military to help with a natural disaster that suddenly overwhelmed the region. 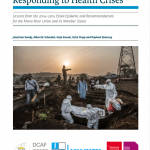 Similarly, deployment of the military in health disasters can be an opportunity to strengthen the bonds between soldiers and the public, and through that to raise the sense of pride and integrity of soldiers. See, for example, this analysis of the use of the security soldiers doing the Ebola crisis in West Africa.